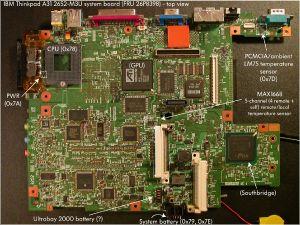 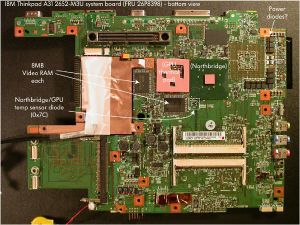 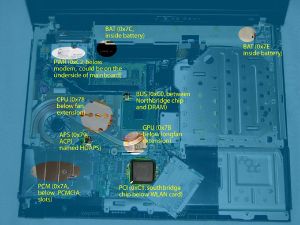 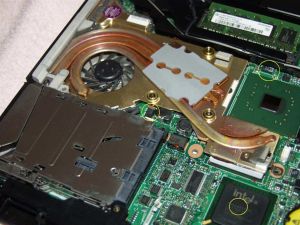 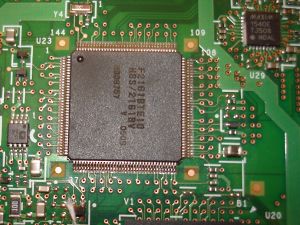 I (User:jal2) had a look into the schematics of the T500/W500 mainboard. There are thermal sensors at the CPU (internal diode), WWAN (Q21), under dem SO-DIMM slots (Q31), graphics chip (discrete only, internal diode), at the WLAN slot (Q104) and at the bottom side below the ICH (Q93). All Qxx are small, three pin transistors marked in the silk screen. These sensors are connected to a MAX6693 (U4), which also measures its own temperature. U4 in turn is connected via SMB to the EC. No idea about the mapping of the sensors to the indices in thermal, maybe someone wants to determine it using cooling spray? 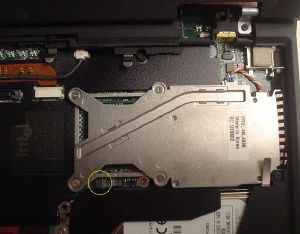 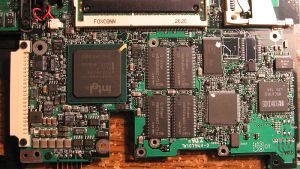 These sensors were found on my X60:

That is what I think is right for the ThinkPad X120e notebook. Since it has an integrated graphics card, CPU and GPU temerpatures are always equal. I am guessing that temp7 shows the battery temperature as it follows the values in /sys/devices/platform/smapi/BAT0/temperature from tp_smapi 0.41 (without the comma: a value of 26700 representing 26.7 in tp_smapi shows 26.0 in temp7 at the same time), however removing the battery leaves it at the last reported value. Values for temp2, temp4, temp5, temp6 and temp8 always stay at 0. Put the following in /etc/sensors.d/ThinkPadX120e:

I am seeing more sensors on a X220 Tablet: