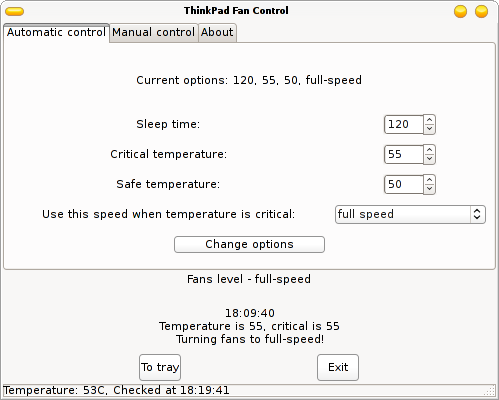 Ansible will ask the level that you expect that fan, and defaults to full-speed, in order to be use it when things goes hot:

IbmPad's IBM_ECW fan control program can also be used, but it is more flexible in terms of compatibility. This program can be downloaded at IbmPad's website. For additional help or support, please post in this forum topic.

If the speed reported is 65335, then is typically due to a broken fan assembly. The fan might still be rotating. This error can be intermittent and can prevent booting (Error 'Fan error')

Hint:
Apparently the pulsing fan noise experienced by some users can be cured by repeatedly running 2-4 seconds of manual control followed by 0.5-1 seconds of disengaged mode. The pulse occurs when the the embedded controller computes the fan speed and adjusts the fan voltage adaptively every few seconds (~4.8sec for the ThinkPad T43); the aforementioned mode switching doesn't give it a chance to do so. Some of the ACPI fan control scripts implements this solution.
Hint:
To force engaged mode using TPFanControl for Windows, enter '64' as the value (0-7) for manual mode. This can also be incorporated into smart mode through a custom tpfancontrol.ini