How to change the BIOS bootsplash screen 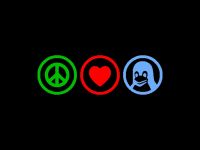 Trinity Bootsplash only (THIS LINK IS DEAD BY NOW!)