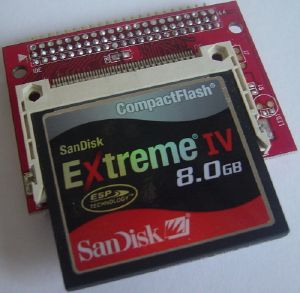 For the time being, it does mean giving up on storage capacity. Since most of the faster CF cards are currently (July '08) only available in capacity up to 16GB.

ATTENTION!
The second (slave) slots on dual slot adapters do not work on newer ThinkPads, including the X41, X41 Tablet, T43, T43p and R52. Because their IDE interface is actually connected to the SATA controller via an IDE-SATA bridge. The second slot works fine on the others, like the X40, which use a native PATA controller, and 2 separated drives will be recognized.
ATTENTION!
On the X41, X41 Tablet, T43, T43p and R52, the system will complain that an unsupported disk is installed (Error 2010), but will continue to boot after 5-10 seconds or after pressing enter (assuming you have a recent BIOS installed). The beeps can be muted by using the hardwrae mute button before the last shutdown/reboot