Note this is a full height/half size and not a 'low profile' slot (the PCI card on the pictures below is "low-profile", but "half-size" cards also fit in the Dock II). Separate brackets are required for low profile PCI cards. Normal cards will not fit.

Many use the half-size PCI slot for peripherals like secondary video cards, TV tuners, audio cards, etc. This is considered by many to be the highlight of the Dock II, and is a feature that few other docks have. The Dock II does not support AGP or PCI Express. The Ultrabay 2000 slot can be used to connect other IBM peripherals, such as second hard disks or CD/DVD drives. Potential owners of the Dock II are often concerned about compatibility and recommendations of video cards. See the compatible video cards list below for more information. 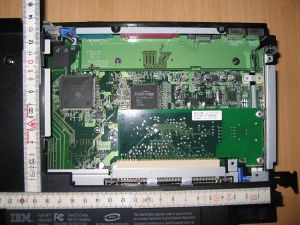 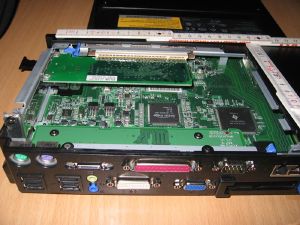 In order to use a larger than "low-profile" card with the Dock II you can use a PCI riser. This means you might have to build a hollow support base for the dock, but it will allow you to connect any card. These PCI risers can be found at places such as [1].

The PCI slot is most often used for installing video cards to allow for multiple monitors. This feature is especially useful for anyone that requires visualizing a large amount of information, including stock brokers, artists, etc. Due to the slow PCI bus, gaming is generally not improved much by external cards. In fact it is more than likely that using an external card will harm gaming performance due to the number of PCI devices sharing the bus in a typical Thinkpad, the immutable latency_timer of the Dock II's PCI slot and the proprietary bridge connecting the Thinkpad to the Dock II. Bandwidth on an a22m with no other peripherals seems not to exceed 35 MB/s. One of the chief concerns of low profile video cards is whether they support the monitor setup you desire. As more monitors these days are LCDs, quality DVI support is essential. Additional concerns include driver support, ability to hot-swap (add or remove the thinkpad without rebooting), and noise/heat. A PCI video card CANNOT drive the ThinkPad internal LCD, there is no such signal path.

Also the newest ATI video drivers for both Linux and Windows are known to not have limited resolution support on the external DVI port anymore.

It is unknown whether hot swapping is fully supported. Check the thinkpads.com forum for more information.

Since the Dock II has been reported to be a bit noisy, some people have taken to unplugging the fan inside (or possibly replacing it). While this likely voids your warranty, it may be necessary if you really want it quiet. Adding a video card increases the heat inside the dock, and may likely have a fan on board as well, meaning it will increase the noise level. While adding one of the below video cards is likely well within the thermal limitations of the dock, you should take into consideration the noise and heat it may add.

The fan is located inside the power supply and is 40x40x13mm / 5V. To reduce noise the fan for example can be replaced by any 12V-fan, that starts when operating at 5V (many don't). An instruction can be found in Thinkpad-Forum (German).

This is a list of the most popular low-profile PCI video cards used with the IBM ThinkPad Dock II.

ThinkPad Dock II supports the VIA VT6421A PCI RAID Controller card. Controller is equipped with a one internal PATA port (UltraATA133), one internal and one external SATA 1 port. The controller however, does not allow booting, it is probably caused by bios. 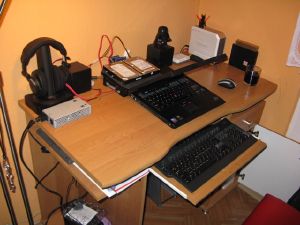 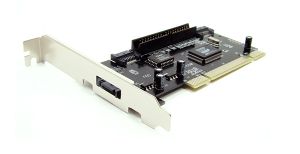 Note to T4x owners: UltraBay 2000 is an older Ultrabay technology, not compatible with the UltraBay Slim in the T40/T41/T42/T43 lineup. Many UltraBay 2000 accessories are available on Ebay.

The docks IDE interface is a CMD 648, so you should enable the according kernel option (compile it into the kernel if loading as a module doesn't work), if you want to use anything else than a floppy in the docks UltraBay. Note that the interface will most likely be ide2 and ide3 then, so the docks UltraBay drive will be hde.

Nothing special: 2 additional Type II slots. This may be helpful if you need a certain PC Card only while docked (e.g. a second GBit NIC), or if you have 2 PC Cards that physically won't fit into one pair of slots at the same time (e.g. 2 WLAN cards or 2 Villagetronic VTBook Video cards ).

Please be aware that not all Thinkpad models will support DVI output with a Dock. Apparently, X and T2* models do not. Please add other models if you know about them to not support DVI.