X RandR is used to set the size, orientation and reflection of the screen display outputs.

xrandr is the command line interface to the RandR X extension. As usual with X good documentation is hard to find, to start somewhere try

Start testing with a default configuration. Connect the external display to the VGA port, turn on that display, boot and run (as root)

after creating a clean Xorg.conf restart X and logon

You will probably find you have a display only on the external VGA screen at its default max resolution.

Open a terminal window to use the command line: 'Applications:Accessories:Terminal'

Hint:
First look at the 'help' and 'man' pages.

To query what we have $ xrandr -v

So, the story so far

2007-07-25: xrandr enables dynamic resizing of screens, switching both external and laptop screens on and off, and the applications windows can be dragged from one screen to the other. None of this requires configuring anything special for /etc/X11/xorg.conf. Downside: the virtual screen is not big enough at at 1600x1600 to permit a 1024x768 laptop and a 1600x1200 external monitor screen to be used in a non-overlapped arrangement, something that is possible doing it the old way.

The good news: a Graphical Configuration Tool, bad news: it dosn't work too well. If installing from a tribe 5 CD then this will be found in the menu: 'System: Administration: Screens and Graphics'. If you have been upgrading from earlier releases you may need to install from 'Applications: Add/Remove: System Tools' 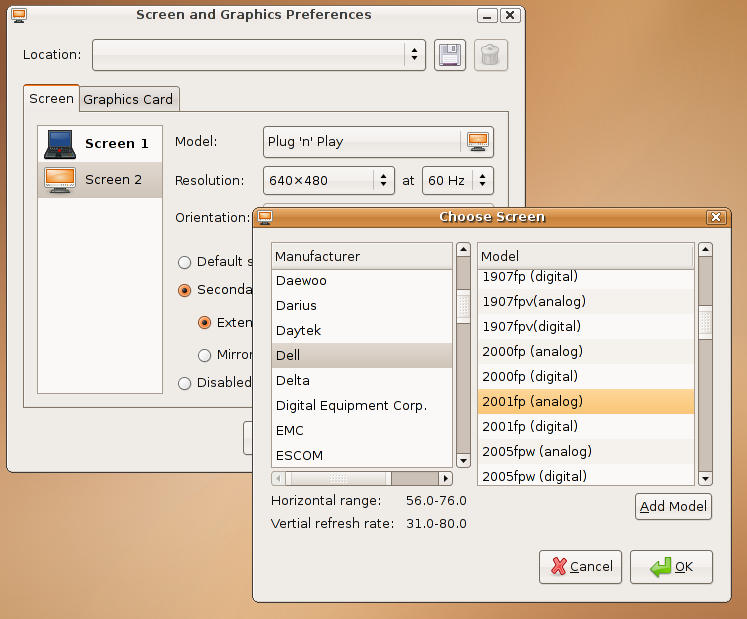 This provides a dialogue to set the default screen, and a secondary screen as either a mirror of screen 1 or an extended screen. At the moment this is far from stable and changing settings causes modifications to the xorg.conf that will cause X to fail. This issue is not confined to the Thinkpad R60e, testing with a Toshiba U300 produces similar results.

Known Limitations - No support for "zaphod mode" dualhead. This is the mode in which two Device sections are placed in the config file, and doesn't support DRI or many other features. Instead, only "MergedFB-style" dualhead is supported. - No support for X Screens larger than 2048 pixels in either direction before the 965. This reflects hardware limitations in the x direction on those older chips, and limits dualhead functionality. It may be possible to extend the limit vertically on these older chips. - i855 XV may cause hangs. This was present in the previous release, and no workaround is known. - SDVO TV-out cards not supported. This should be fixed in the next release. - Gray output with integrated TV-out and PAL TVs. - EXA support unstable on i845. - Some GM965 systems, such as the Thinkpad T61, probe the TV as being connected even when no output connector is available. This results in the gnome-panel issue noted below.

Common issues not caused by the driver - Font sizes (DPI) are wrong. Some displays incorrectly report their physical size, which is harmless on most OSes that always assume 96dpi displays. This can be fixed through quirks for specific monitors in the X Server, and the output of xrandr --prop along with a physical measurement of the screen size in a bug report against the server can help get that fixed. - gnome-panel is located in the middle of the screen. gnome-panel places itself within head #0's boundaries, which doesn't work well with a second head covering the same area as head #0 but larger. - Older resolution-changing applications have poor results in multihead systems. Previous extensions such as RandR 1.1 exposed only a single output to client programs, and those requests map poorly to multi-head systems. Currently, those requests map to just one of the outputs in the RandR 1.2 environment, and those applications need to be updated to RandR 1.2 API when available for better results.

the 3D engine has an 11 bit coordinate space at one point making it impossible to draw to areas beyond 2048x2048. At another point, it has a stride limit of 8192 bytes, so you can't even draw to a subset of a larger frame buffer.

One more bit in both of these registers would have solved the problem for pretty much any supportable monitor configuration (the chip can only support two single-channel DVI outputs at the most; 1920 is the widest size supported at single-channel speeds).

For multiple monitors, the driver could allocate multiple frame buffers and step through them one at a time with appropriate clipping. It would be icky, but could be made to work.

Of course, the latest hardware (965G/965GM) has plenty of coordinate space, which does tend to reduce the odds that someone will get excited enough to go fix the driver for older chips.

The Gnome menu bar lands on Xinerama Screen 0 at this point, which isn't currently something that you can set through RandR. On Intel the allocation to Screen 0 is determined by CRTC order and LVDS only runs on screen 1.

For versions of Ubuntu prior to 7.10 see Installing Ubuntu on a ThinkPad R60e for an Xorg.conf suitable for use with more than one screen

xserver-xorg-core and xserver-xorg-video-intel might cause some trouble but also brings nice features.

blog post with xrandr-1.2 commands and photos. Narrative is in polish.