Difference between revisions of "Replacing T430 screen with a better one"

Many people have investigated the possibility of upgrading these screens, notably on Notebook Review Forum at the thread "X1 display on a T430?" and on ThinkPad-Forum at the thread "T420/T430 auf FHD-Panel umrüsten (wie Alienware 14" FHD matt) ... Gibt's schon Infos?".

At this time (July 2015) there are two candidates:

The article itself is written in order to be improved with future discoveries on the subject: any future contribution will be welcome! 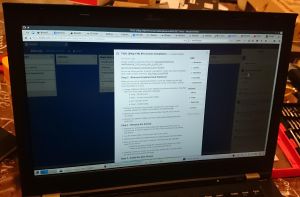 T440p and T440s feature excellent IPS/AHVA panels (1920x1080, Full-HD), that by definition are superior to the screen mounted on the X1 Carbon. They've been reported to have same dimensions, but use different connection standards (eDP instead of LVDS).

As of July 29th, 2015, Chinese ThinkPad modders at 51nb have developed an eDP to LVDS converter board that allows most T440s/T440p 1080p FHD IPS Panels to be installed on ThinkPad T420/T430 and T420s/T430s models. (non-s and s models use different-sized boards due to case constraints). Unfortunately, due to linguistic barriers and shipping fees, it is difficult for these modders to sell to the English-language market, much less offer support.

But from time to time some ThinkPad fans with connections (like RMSMajestic) are able to obtain a batch.. He sells it for $40 (s model) or $50 (non-s model), with $5 cont. US shipping and $15 or more international: though the catch is that you need to be a ThinkPad Forums member.

The following guide is based on the successful installation of the X1 screen on my T430. Nevertheless, thanks to similarities between T430, T430s, T420 and T420s the information hereby presented could be applied to them as well.

The HD+ display mounted on X1 Carbon is a 14 inches TN screen made by LG. This screen has been praised by reviewers3: it features good viewing angles, rich colors and high brightness. An interesting comparison between this screen and one of the awful screens mounted on T430 has been published by Laptop Reviews: "Thinkpad X1 Carbon screen comparison to other Thinkpads".
The only evident weakness of this screen is its strong blue hue, which although can be corrected by calibrating it. I've uploaded an ICC profile for X1 screen on Notebook Review.
Talking about compatibility, this screen has the right connector (40-pin LVDS) and the right dimensions to fit perfectly in the T430. Besides, it can't be screwed (the original is screwed) and, most important, its connector is on the wrong side (on the right instead of left). In the following solutions for these problems will be presented.
The X1 screen can be purchased straight from Lenovo or from third parts for quite less money.

Keep the old screen safe. You might be tempted to throw that awful screen against the wall, but if you ever need to send your ThinkPad for warranty repair, you should reinstall the old screen first. That way, there is no trace the ThinkPad was modified.

Swapping the LCD cable (if necessary)

This isn't a trivial task: you will need to unplug the keyboard and the keyboard bezel assembly. If you're a bit practical with this sort of things, it would take approximately 40 minutes. If this is your first time opening a laptop, maybe you should ask someone to help.

Instructions for replacing the LCD cable can be found on Lenovo website: "LCD panel and LCD cable removal and installation - ThinkPad T430 and T430i".

The HD+ LCD cable works both with HD+ and HD panels.

The cable connector of X1 Carbon panel is in the wrong position: on the right instead of left. In order to connect the panel to the LCD cable is therefore necessary an extension (sometimes "converter cable" or "extender cable").
One can think about it for one night long, but, by using the standard type of "left to right" extension, there's actually just one possible arrangement that allows not to irreversibly remove parts of the back shell: see the following schema.

If you don't want to irreversibly remove parts of the back shell, this is the only possible arrangement that allows to connect the screen with the LCD cable using a standard "left to right" LCD cable extension. Representation not to scale.

In order to fit in this arrangement, the extension cable must be longer than 16.7cm. Beware that the extensions sold to fit in 15.6in displays are usually long just 16cm.

Unfortunately, cables of this length are difficult to find from reliable sellers. Also, each model presents different challenges and requires certain folding methods or modifications to work. Be aware that the screen mod is still under constant research, and trial and error will probably be necessary to find the right seller offering the right product.

The three models hereby introduced and their installation will be described in the following.

A simple solution that doesn't work

The most common model of extension cable seems perfect for the job: the only necessary modification is a small cut (see picture). Unfortunately, such model has been proved not to work on the long run: the tight bend next to the male connector has the effect of deteriorating the soldering between the connector and the cable itself.

The most common model of extension cable.

However, if you want to try this method anyway, here is a known reliable seller:

A complicated solution that works

A model of cable extension where the male connector isn't soldered. Unfortunately, in order to fold it near the male connector, it is necessary to remove two plastic layers that are very well glued to the cable.

(These instructions were originally written in broken English, so be careful)

This cable mod, while difficult, works fine (I'm using my modified T430 from a couple of month and it's working perfectly). So if you can't find the cable in A Simple Solution that works, this is your best alternative.

A simple solution that should work

Searching the internet I found some pictures depicting a cable extension where the vertical segment near the male connector is longer than standard (see picture). I'm pretty sure that its form factor, by allowing to fold the cable far from the connector, would enable not to damage the soldering, without requiring important modifications.

This model of extension cable would probably fit our requirements without any particular modification.

This cable can be hard to find. Sometimes, sellers are dishonest and use the wrong photos, so it takes trial and error to obtain the right cable. We don't know any reliable sellers at the moment.

Warning: You must remove the battery or unplug the AC Adapter before continuing. Failure to do so will blow the backlight fuse and damage the motherboard.

Although X1 Carbon LCD panel isn't fitted with screw holes, placing it in the T430 body is quite straightforward. This new panel have indeed dimensions perfectly equal to the original and, once in its place, it is vertically sustained by the original vertical supports. The screen can be supported horizontally too by adding shims on its left (I've used folded cardboard), see the picture. Thin shims are necessary on the back of the screen too.

Everthing is in its place, just the panel is still lying on the keyboard upside down, ready to be placed in its final position.

Warning: DO NOT plug in the connector backwards! This will blow the backlight fuse and damage the motherboard.

Finally, the screen will be locked in its position by the screen bezel. While re-assembling the bezel, start from the lower side and pay attention to correctly fasten the three hooks present in the center part of this side (it is difficult, but if you don't do it you'll end up with a big hump).