This guide will explain exactly how to replace your xx30's keyboard with an xx20 Classic keyboard. (Personally, I used a T410/T410p keyboard, but the T420/X220 keyboards share the same FRU and are known to work as well.)

xx20/xx30 keyboard pinouts are slightly different, so first thing you need to do is to isolate pins #25 and #29 (grab a schematic to see where they are). The reason for it is that in xx30 keyboard these pins are separated, but in xx20 one they are connected all together, shorting VCC5M_KBD (pin #25) to ground through the keyboard cable. I disassembled the keyboard and covered #25, #27 and #29 with adhesive tape (#27 is redundant since it's connected directly to ground on the motherboard). Plastic cover on the top can be easily removed, allowing to access internal keyboard connector. 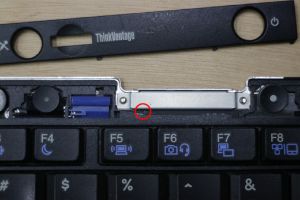 Please note that after installing the keyboard hardware it will not be perfect - unless you also re-flash the Embedded Controller firmware, some keys are not detected at all, others have different functions and all Fn commands are the original ones (listed on the T430 keyboard) instead of those shown on the T420 keyboard.

On a more positive note, during the development of these modifications, no x230 laptops were bricked and there were never any problems or failures.

While you can also order the T420 Palmrest (FRU for the No fingerprint reader version - 04W1371, 04W1372), it does not fit properly with the T430 chassis (See this video for an extended examination)

It is now possible to modify the firmware on your Thinkpad x230 (and it seems several other models, but not all have been tested) to correctly use the classic keyboard.

The capslock light is missing and the Fn+F3, Fn+F12 and Fn+Space key combinations do not work, however it is perfectly usable like this.

Full details on how to create and apply the patch are included in the README of the git repository at https://github.com/hamishcoleman/thinkpad-ec - this will be the most up-to-date source for instructions.

As mentioned above, it is best to use the git repository to build patched images, but I have pre-prepared some patches here.

I have worked on streamlining the process of applying the patches, but am stumped looking for a simple Patching process for Windows users (and am unwilling to simply distribute the Lenovo copyrighted firmware in its entirety). So, I will be continuing to think about how to streamline the patching process.

While it is theoretically possible to fix the remaining one or two Fn-X key combos, they are not needed for most people, so this is a low priority.

If you dont want to re-flash the EC firmware, you can still use the keyboard reasonably well, however not all of the keys work correctly, as detailed in the Keymap Table. However, if a key performs an action, that action can be rebound on a system-wide level to any other action. 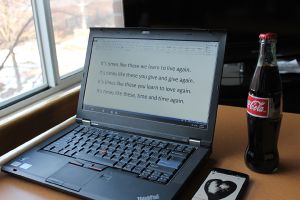 If this guide helped you at all, feel free to send me an email (T430 comments only, please), and if you have any comments or criticism, be sure to send that, too! I'll try and keep this guide up to date as best I can in order to support users looking to make the switch.